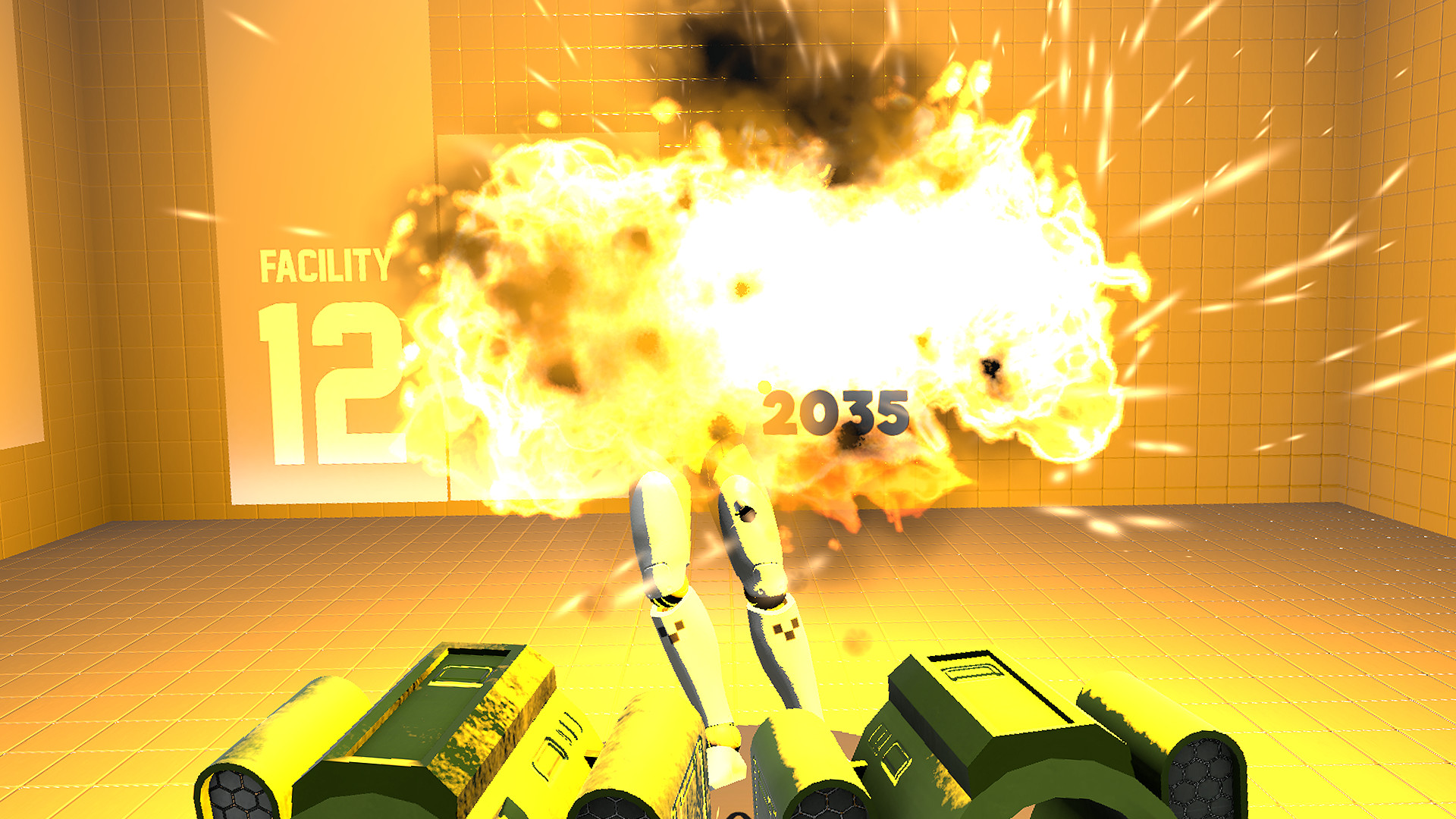 Boss made you work late?
Tinder date ghosted you?
Mercedes cut you off in traffic?
Paper-thin apartment walls with neighbors who break up then make up every night?
Stubbed toe?
“We don’t have Coke Is Pepsi OK”?

Welcome to your home away from home, the Rage Room. Locked in a room with no windows, no doors and a bunch of dummies that just gained sentience... What could go wrong? Fight against the faceless enemies with whatever weapons you can get your hands on!

Free Mode: Demolish hapless dummies with any weapons you can. Choose from the basic weapons to start and gain enough credits by destroying dummies to unlock bigger and messier tools of destruction. This sandbox mode is all about playing around and doing whatever you want.

Story Mode: Begin at ‘Facility 12’, a testing facility for different weapons as well as the most effective ways to deliver pain. You begin with basic weapons such as bats and clubs, then move your way towards more devious weapons such as crossbows and bubble guns. Be warned some of the dummies have been exhibiting sentience and aren’t too keen about being destroyed for the sake of science.

Frenzy Mode: Choose between frenzies that showcase various weapons types in Rage Room. If you ever wanted to be a Ninja *of course you do* well here’s your chance! With 7 different frenzies to choose from, race against the clock to destroy the dummies.

You can also customize your dummies with 32 different accessories. Dress the dummies up with goatees, cowboy hats, afros or dunce caps. Even a dummy should look like a dummy, or the co-worker that microwaves fish.

Welcome to Rage Room an experience designed for VR. 7ad7b8b382 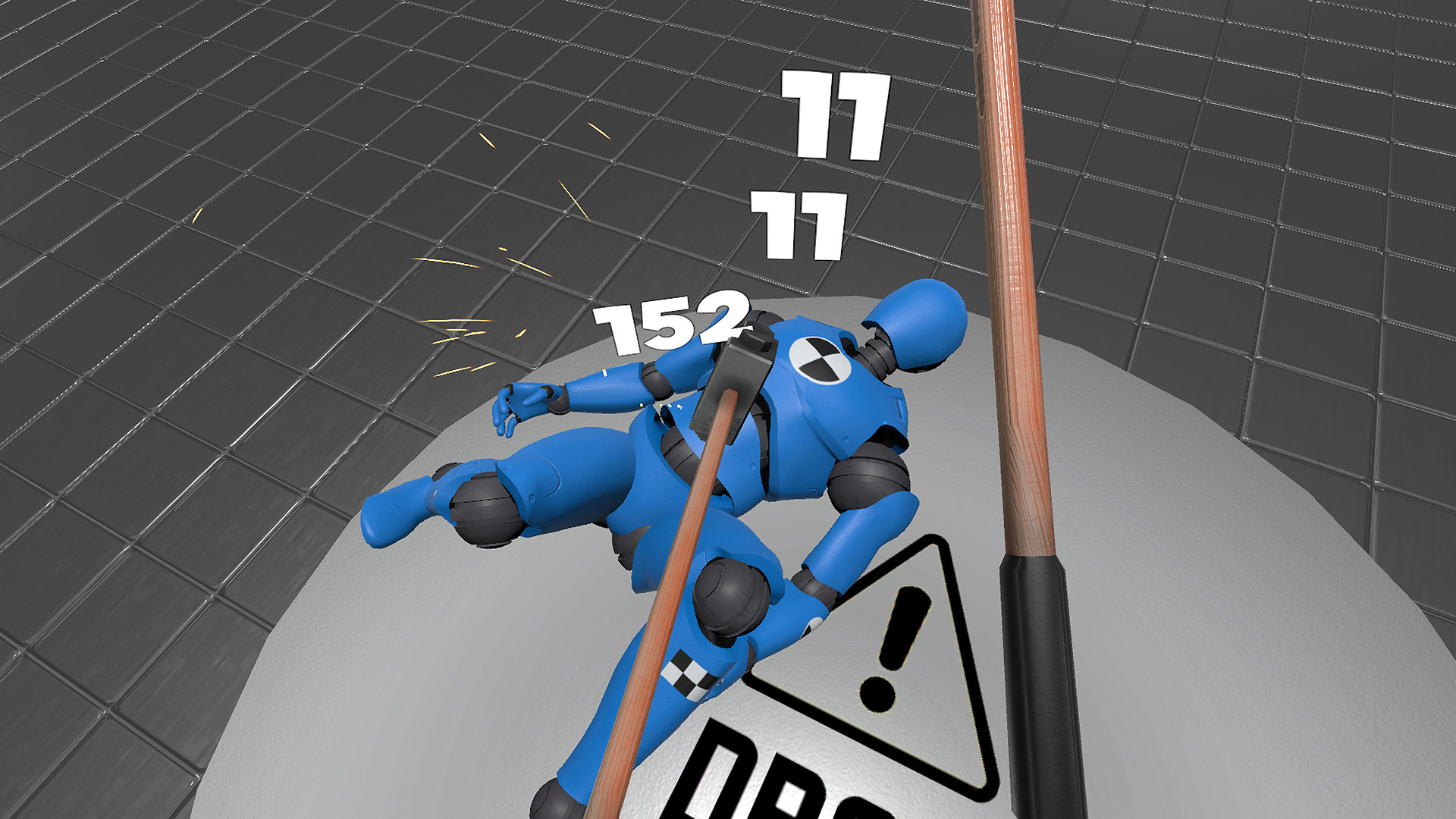 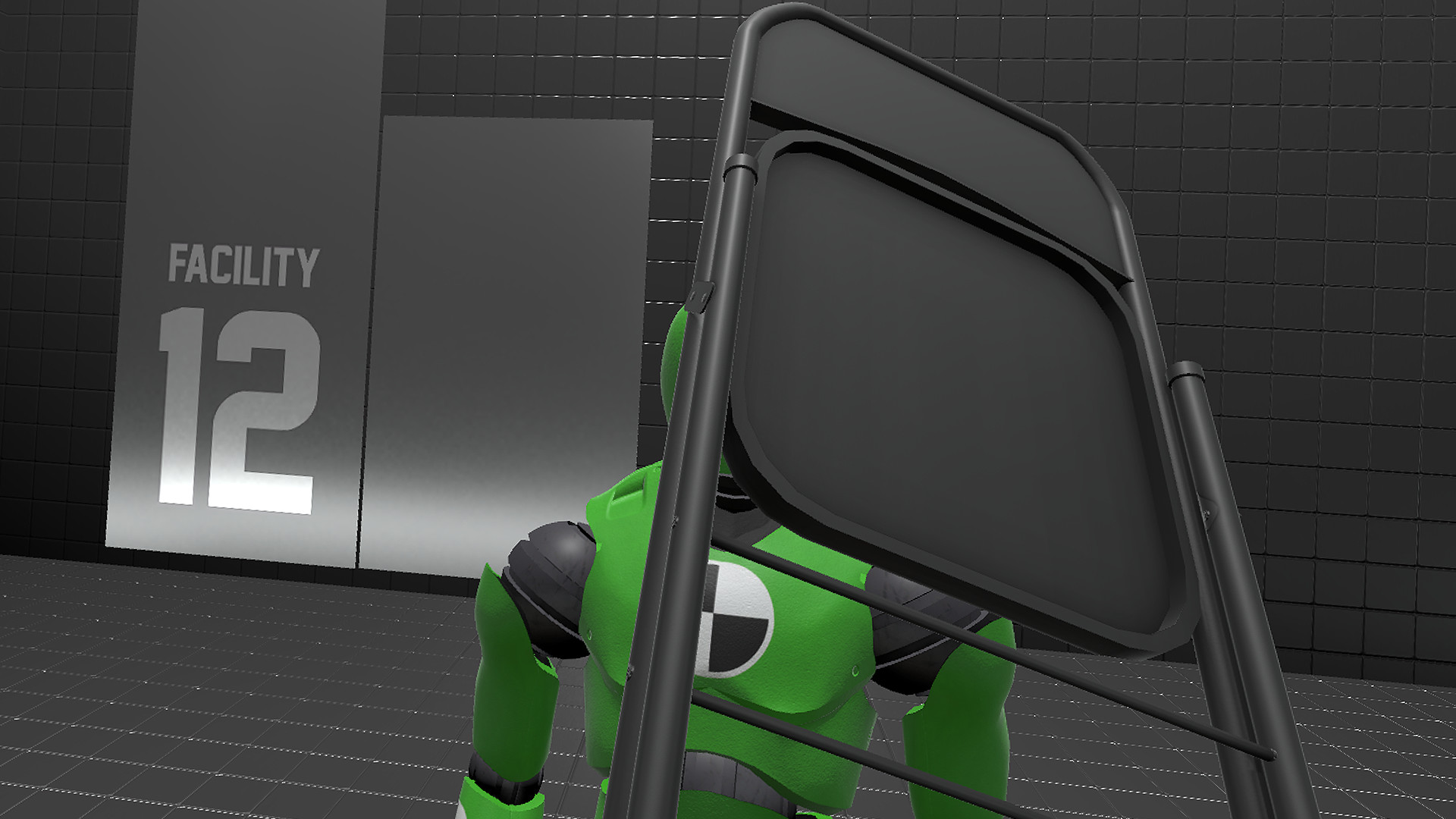 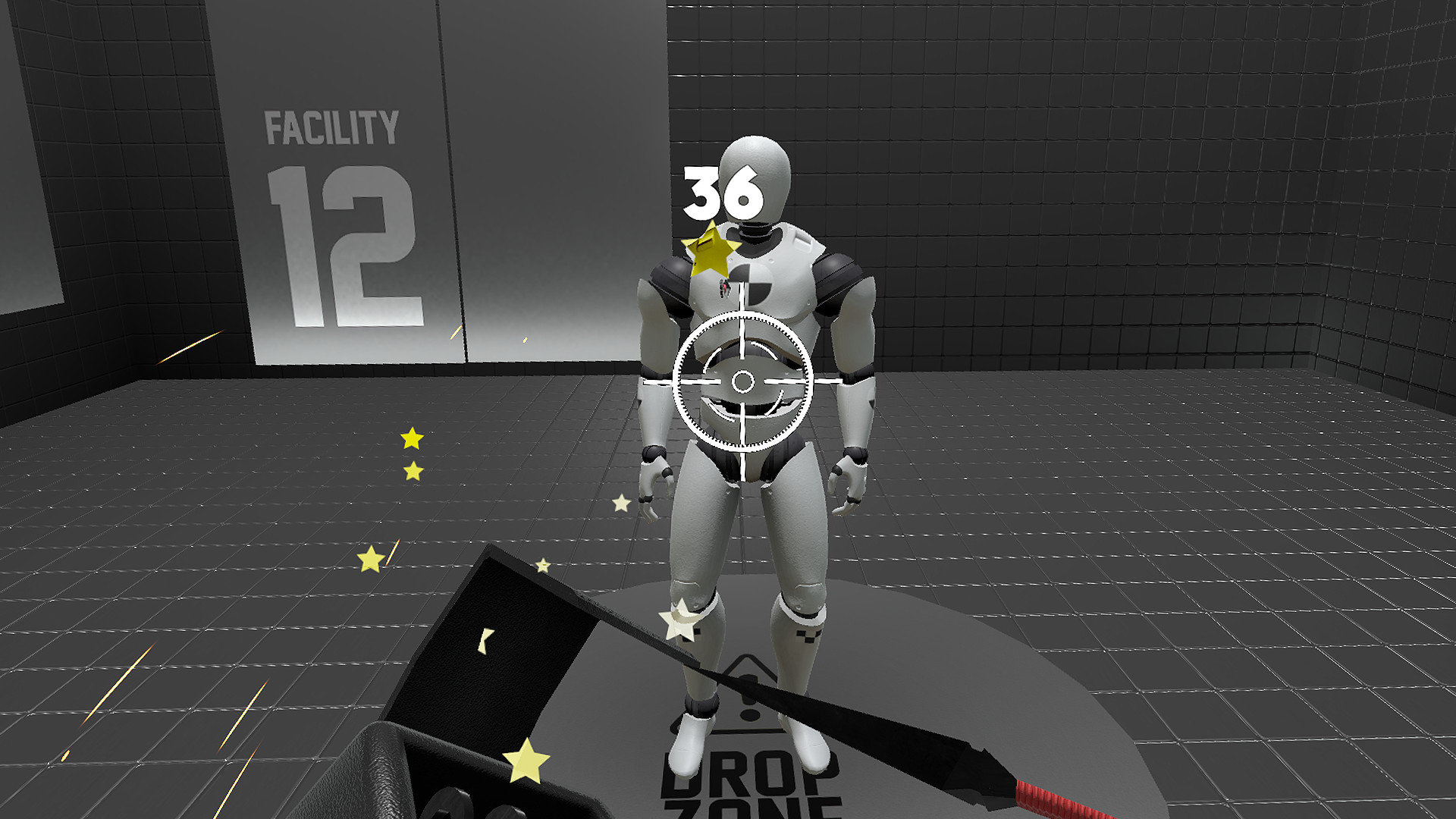 
Game is really bad. We are talkin about using your face to aim throwing knives. Buy GORN instead.. Let me start by saying Rage Room is kind of like Gorn and Happy Room had a baby but VR got custody of the child. It is a kind of sandbox\/ ragdoll physics game that is really funny and pretty bad\u2665\u2665\u2665\u2665\u2665at times too. The Rag Doll physics are really fun admittedly I am a sucker for them but the way the dummies get up and move around is pretty great. When you knock off a leg they just hobble after you and try and attack you!

I haven't finished the Story mode yet but what I take away from the game so far is that its not taking itself too seriously. It's just a really fun game that is just supposed to be a fun game. The mix of absolutely ridiculous weapons and awesome weapons like katanas make the whole thing funny and cool.


Will write more once I have played more - so far, would definitely recommend.. Finished the Single Player mode, meh its ok I suppose - just a shame that the dummies fall through you so your basically beating them up at you feet most of the time, hope the developers fix and add more weapons, could be a great time waster game.. Hitting a dummy with a chair is fun.. I could write a long winded review of this but it's really not worth it. This game needs alot of work. The weapons don't output the expected damage. Physics is way off. Finished the game in 20 minutes and refunded immediatley. DO NOT BUY!. A fantastic game for just having some fun and venting over whatever's on your mind. It isn't without flaws of course (which I will point out further below here).

I honestly did not expect any sort of story mode so that was a fun bonus and a good way to get introduced to some of the weaponry. It gets a bit more intense when the dummies start chasing after you. Especially when they end up right behind you! The gameplay in the story isn't the best part since the dummies end up just tripping themselves or get so close they sit right on top of you. But it still makes for a fun experience.

The free mode is the most enjoyable. Even with the dummies just sitting still, you can do as you please. Get some new weapons, see how they work, throw the dummies around all you want! It's too much fun to smack them everywhere.

That all being said, there are a few critiques I have that could easily be mended within any future updates.

1. The sound effects need to be upgraded. Sound work isn't easy, but when you hit a dummy with a barbed wire baseball bat, you expect at least some form of impact noise. But sadly most of the melee weapons don't express anything like that (aside from boxing gloves and the brass knuckles, two of the most satisfying weapons to use due to that impacting thud). The only sound you get is a light thud of the dummy hitting the floor. It makes your attack feel so much less powerful! A couple different sounds added in would really change that fact and make the game far more immersive as well as just plain satisfying.

2. Free mode Options. In free mode, you get one dummy and one drone, but that's all. I would like to see some more options to really give it that sandbox feel. Something where you can select how many dummies or drones there are, where they're placed, if they are sentient or not and such. It would be greatly interesting to see a sentient dummy who is not being aggressive but would turn so after being attacked. Just another little something to add more flair to the mode.

3. Workshop support. I was looking for it but did not see any form of workshop for the game. In something like this, the steam community could really add to the features. I can only imagine the crazy weapons that would come out of that workshop and they could even have set gold amounts to be unlocked as well to keep that mechanic in play.

4. The Physics. Perhaps not something that is needing to be "fixed" so much as just adjusted or even made adjustable. It is really entertaining to send the dummies tumbling to the ground but with a few weapons it just feels a bit off. They mostly react to you pushing them with the weapons more than the impact itself it feels. I would expect a high speed swing of a baseball bat to really send them flying while a brass knuckle would put them on the ground in front of you. If the weapons were given specific forces to affect how far the dummy goes, that would also add some fairly enjoyable reality to the game. It is still hilarious to lift weapons from below and make them do cartwheels!

Overall, still a very fun game to enjoy. With a few updates, it could be perfected into one satisfying way to vent!. Gets real boring real quick. Plus after you beat the story mode you don't even get all the weapons immediately, you have to gain point to buy the weapons. The physics feel kind of crappy, as enemies will fall down at the slightest touch and they'll sometimes start hovering towards you when they're on the ground (Which freaked me out a bit the first few times it happened.) I even found myself just holding my weapons against the enemies to get over with the annoying missions of the story mode. Although, I did like using the tip of the bats to push enemies down by the chest, it's one of the only parts that I liked about it. Please spare yourself from this game and get Kungfu Town VR, it's honestly better, and it costs less than Rage Room's regular price. I'd definitely give this game a 3\/10.

EDIT: Forgot to say, but the glorified dolls they call test dummies fall through you half the time, which gets VERY annoying. [GAME RATING LOWERED TO 2.5\/10]. This game needs Wolverine claws that will stick to them like i went through. And that go through so you can shove them into the disintegrator or whatever its called and they BURN!!!