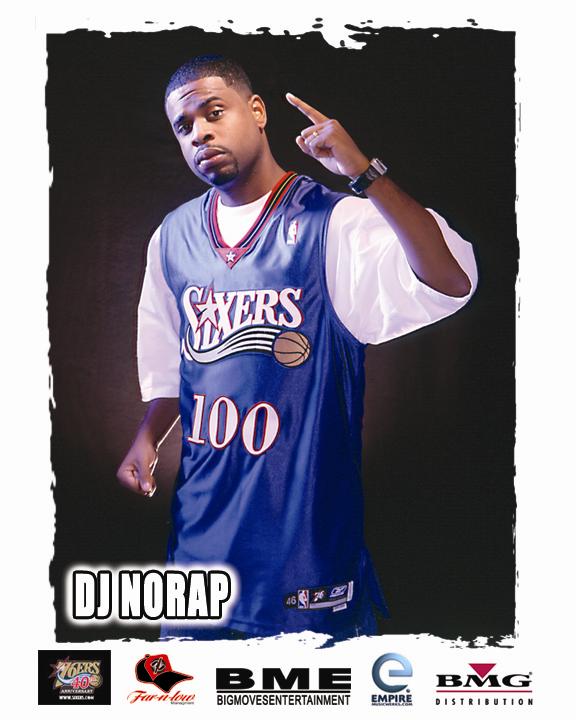 As a professional DJ I have had many great accomplishments and milestones that consist of:1982 Performing along artist such as The Legendary Tuff Crew and DJ Jazzy Jeff ·

2001-2003: One of the first DJ in history to obtain a NBA contract for the Philadelphia 76ers NBA basketball team.

TNF LLC. was established in 2003 by former NBA DJ for the Philadelphia 76ers DJ NORAP. The vision of TNF is to produce music that will be timeless and everlasting, due to rumors that music is dying DJ NORAP wanted to show the world that music isn't dying but is being transformed into a new sound that is being heard in many songs today. The music that is produced by TNF is in the genre of Electro Hop. This is a blend of Electronica music and Hip Hop music, the electronia sounds will take you to a new world and keep you excited with its sensitized melodies along with the hard hitting drum and bass that creates that classic hip hop feel makes you want to bring out that cardboard box, lace up your shell tops and start break dancing again. The sounds that are used are similar to those that created history with such artist as the late great MICHEAL JACKSON, MANTRONIX RUN DMC and the BEASTIE BOYS just to name a few.
DJ NORAP Phantom Revenge World Tour Upgrade 5.0 -TNF / Island Def Jam Digital Distributionhttp://itunes.apple.com/us/album/phantom-revenge-world-tour/id508120491

When one thinks of area mixtape kings, names like Cosmic Kev come to mind. And while there’s a host of other deejays putting out quality mixes, they all need to make room for the next mix master, DJ Norap, who’s set to bless heads nationwide with his major label debut. Norap has been a legend on Philly’s musical landscape since the heyday era of the mid-’80s, when rap groups Tuff Crew and Crown Rulers ran things and when Steady B’s Hilltop Hustlers were in the formative stages. “I really got started in this through carrying records for Cash Money and Jazzy Jeff,” Norap said, discussing his coming of age through the hip-hop ranks. “And it was like in ’83 when I first started noticing Run-DMC, then LL Cool J. It made me want to get involved.” Norap has been involved early on, as his family members were linked to the burgeoning Philly hip-hop sound as he was sharpening his production skills. “Back in ’86, with the whole Philly vs. New York thing, I was set to battle Mantronix at The Spectrum,” Norap said. “I was young at the time, so I really couldn’t go. But win or lose, I knew that if I made it to the battle, I would have been good.” Those old-school efforts has propelled Norap to his current position on the cusp of major release. His set, titled “The Empire,” features a blend of all-exclusive material from national and local artists such as, KRS-One, from Peedi Crakk, Boyz ll Men ,Dipset, Lil Flip and others. Older Philly heads will sincerely appreciate the hot remix to Tuff Crew’s “My Part of Town.” But it wasn’t so simple remixing a classic, especially a Philly-produced gem. “Being a producer, I knew I could do the remix,” Norap said. “I went to my brother, David Dickerson, who was a member of Tuff Crew, and he said I could do it, as long as I did it right. I just updated it. I was satisfied with it in the studio, but I knew it was good when I went into Egypt nightclub and they were playing it.” But as Philly rep, he embodies that Rocky mentality and all-out approach to his craft, and wishes other area talent reciprocate the love he shows them on his mixes. “I’m trying to teach Philly hip-hop to the world,” said Norap. “And I want to keep my brother’s name and Tuff Crew’s name alive. People act like they forget.” Norap’s “The Empire,” is due out soon, and he is currently in the midst of an international tour with Rene Harris’ PureMovement. Readers can get at Norap via e-mail.

Something is different about this season's edition of the 76ers, and it has nothing to do with the new-look roster or Allen Iverson's new hair-braid designs. In fact, the change in the Sixers can be found with their newest signee, wearing No. 100, disc jockey Norap. Norap is only the second team-sanctioned DJ in the NBA; the Miami Heat also employs a DJ. "It's a dream come true," Norap said of playing for his hometown team. "I have been a Sixers fan since the '70s, and I value this every day." Norap's duty is is to keep the crowd entertained and energized throughout the game. Most of his work is done during timeouts, dead balls and halftime. "It's like I'm a DJ on call when the team needs something played right away," Norap said. "If they go to a timeout, I'll play something inspirational. "They give me freedom and trust my judgment to play something good if, say, AI makes a good play." Norap, 35, who has been on the Philly scene since the mid-1980s and tours worldwide as a member of Rene Harris' Pure Movement dance troupe, is used to performing in front of large groups, but it's much different catering to the diverse Sixers crowd. "I'll play some music to get the crowd into it," Norap said. "I'll play anything from Beanie Sigel to Nelly to Alien Ant Farm. "I also play during warmups and practicing. I've even seen the refs jamming to my music. That's what I bring to the table, a new feel." Norap brings with him a crate of vinyl records, but also spins custom CD mixes, compiled from his collection of 3,000 songs. He originally thought he'd have a plan going into each game, but scrapped that idea after Game 1 and plays it by ear. Norap, who plays on the opposite side of the floor from the house band, receives equal playing time. "They give quick flashes of both the band and I on the big screens," he said. And while some might see having both a house band and DJ as a potential conflict, Norap said that isn't an issue. "There's no problem playing with the band; there's never any competition," Norap said. "But I do get to play and get the crowd into it. And as long as the crowd's into it, there's no beating us." Norap's presence was felt at the recent home game against the New York Knicks. As the Sixers found themselves trailing by 17 points, Norap played the right music to get the Sixers back into the game and on to victory. Even though Norap has been a lifelong Sixers fan, he sees something very different in this team from his perch at the turntables. "This is a very good franchise," Norap said. "The team just has to take it and run with it. This is the only time I felt this type of love in the arena. "Nothing is touching that. This arena, this team, is full of nothing but love."

GILLY DA KID LOOK OUT, BIG UP TO THE FIGGAS

Last readers heard from DJ Norap, he was the 76ers’ official house DJ. More recently, cousin seemed to be on the low. Norap made a quick sabbatical out to Arizona, but the heralded DJ is back with a vengeance, armed with numerous projects. He linked up with rapper Gilly, of the Cash Money Millionaires record label in New Orleans, which had also signed Philly rap group Major Figgas. “This is a big deal,” said Norap, who is also vice president of another label, Judgment Records, and has a deal with Empire/SONY-BMG as a recording artist. “I fit into Cash Money like an artist, but I’m also the official label DJ.” That’s heavy unto itself, as Cash Money is responsible for deep-South hitmakers Juvenile, Hot Boyz, Lil’ Wayne and the Big Tymers. “What’s going on down there [the South] is like a movement,” said Norap. Norap is a much-in-demand DJ with a resume to back up his credentials. After his stint with the Sixers ended last season, the Charlotte Bobcats expressed interest in him, but he decided to run with Cash Money. On his latest mixtape, “The Return of DJ Norap,” Norap is dubbed the “Rocky Balboa of Mixtapes,” and one can see shades of the pugilist’s mentality in him. “Joe from Ruff House records called me that, because I bounced back like Rocky.

News76ers DJ on the move

Larry Brown is not the only member of the 76ers leaving town this offseason. DJ Norap, only the second Disc Jockey in NBA history, is leaving Philadelphia and looking for a new team. Norap is the first DJ to go to the NBA and get a major recording deal from Philly. "Norap's part of town," is due out soon on EMPIRE / UNIVERSAL RECORDS. Norap's agent, Bernard Resnick, is talking to interested NBA teams. Sources close to FOX sports BenMaller.com say that the Sacramento Kings Charlotte Bobcats, Phoenix Suns and Dallas Mavericks are all interested.